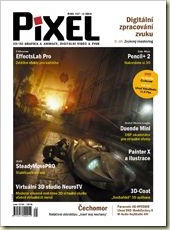 Hi guys, after six months in GlasgowAnimation Ltd. I moved from Glasgow to Prague (in January). Where, in March, I started to work on another interesting project in small animation studio called Art and Animation Studio. We are currently working on feature film "Kozi Pribeh" ("Goat Story"). It is CG animated comedy about two friends based on old Prague legends. Coming out soooon ;)

Since my last post, short animated film "Cheese" was screened on couple festivals. I would like to mention AniBoom Awards 2007 where "Cheese" ended up as one of the five finalist in 'Comedy' category. Winning animation was "Jungle Jail".

Czech magazine about 2D/3D graphics and animation, digital video and sound - 'Pixel' published one page interview, where I talk about Vancouver Film School and "Cheese". Thanks to Petra Stefankova and forum.animacia.sk ;)

Posted by Peter Harakaly No comments: